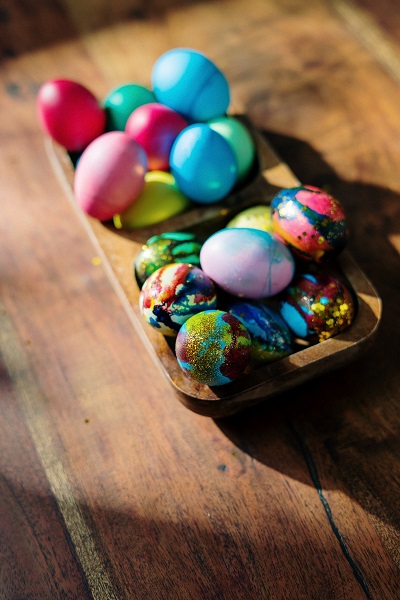 Happy Easter to you and your loved ones.

As we face our Easter festivities with our friends and family on a virtual basis and without the grand feast, I thought it may be fun to review the history of traditions.

While we understand the celebration of Easter in our Christian tradition and the foundation of our faith, I have always been curious about Easter symbols and traditions. Perhaps, you have been equally curious.  Of course, what I found on www.history.com, The Christian Post, and other sites, one would not find in the Bible, but many of the traditions have been cherished through the centuries. The most prominent secular symbol of this holiday is the Easter bunny. Well, I wrote “secular,” but the association with fertility is linked directly to a pagan Germanic goddess, Ostara or Eostre, whose festival occurred in the spring. We have the word “Easter” from her name. Decorating eggs is believed to date back to medieval times but probably has a pre-Christian origin. The tradition of the Easter parade carries a bit of vanity. Other traditions, such as the consumption of Easter candy, are among the modern additions to the recognition of this early springtime holiday.

First, the Easter bunny: The exact origins of this mythical mammal are unclear, but rabbits, known to be prolific procreators, are an ancient symbol of fertility and new life. According to some sources, “the Easter bunny first arrived in America in the 1700s with German immigrants who settled in Pennsylvania and transported their tradition of an egg-laying hare called ‘Osterhase.’” Their children made nests in which this creature could lay its colored eggs. Eventually, the custom spread across the United States.

Second, the Easter egg: While Easter is a religious holiday, the Easter eggs are likely linked to pagan traditions. The egg, an ancient symbol of new life, has been associated with pagan festivals celebrating spring. From a Christian perspective, Easter eggs are said to represent Jesus’ emergence from the tomb and resurrection. Decorating eggs for Easter is a tradition that dates back to at least the 13th century. One explanation for this custom is that eggs were formerly a forbidden food during the Lenten season, so people would paint and decorate them to mark the end of the period of penance and fasting, and then eat them on Easter as a celebration.

Third, Easter Candy: Again, the most popular of these sweets are the chocolate eggs, which date back to early 19th century Europe. In addition to egg-shaped candy, we now have chocolate bunnies.

Finally, the Easter Parade which dates back to the mid-1800s in New York City. “The upper crust of society would attend Easter services at the various Fifth Avenue churches then stroll outside to show off their new spring outfits and hats.” Average citizens would show up to check out the action. This tradition lives on in Manhattan and likely in other areas as well. While this event has no religious significance, sources note that Easter processions have been a part of Christianity since its earliest days. And I, for one, regret the tradition of wearing a new hat to church on Easter Sunday.

As we celebrate the resurrection of Christ and the resurrection of our faith, may we reflect on the last forty days of Lent and how we have renewed our faith.  And with this message, we also learned some trivia that may help you with the conversation at the Easter feast.

Be safe and I hope to see you all soon.

God’s blessings to you!